Home » Guides » How to Play A7 on Ukulele + 4 Easy Variations!
Guides

How to Play A7 on Ukulele + 4 Easy Variations!

How to Play A7 on Ukulele + 4 Easy Variations!

Welcome back to another lesson on how to play the A7 chord. We already finished with showcasing the basic minor and major chords and now it’s time to explain how to play this type of chord and how it is formed.

A seventh chord progression is a mixture of a triad and an interval of a seventh note. The A7 chord falls into the group of dominant seventh chords and it’s written simply by adding the number 7 after the chord letter. In some cases, you will also be able to find this chord named as the A dominant 7th or Adom7.

Play A7 on Ukulele: How to Play It

A one-finger chord may be one of the easiest to play. Merely take your index finger and place the tip before the primary fret of the C string. Be sure you use the smallest part of your finger as attainable and maintain it straight up so that you don’t by accident contact the G or E strings beside it. Pluck all of the strings to verify the notes are clear.

As it is one of the easiest chords, you just need to remember how to press it. There is no need to practice this one because you should use only one finger to do it. No matter that the dominant seventh chords use 4 notes, the other three we already have as open string notes, so you need to only press the C# to form this chord.

Let’s check out how this chord is created step by step and we will cover several other positions and variations on how to play the A7 chord on your ukulele.

To play the root position of the A7 chord, you need to press only one string on the first fret, and that will be the C string. Once again to remind you, try not to mute the neighboring strings while playing it. Here’s how to press this simple chord: 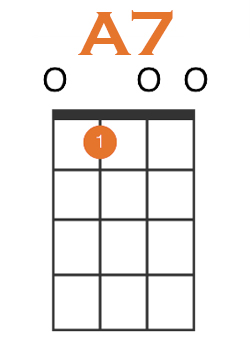 Simple as that. Now, let’s check out the other formations of this chord.

For the first inversion of this chord, we will use one interesting pressing that we didn’t have a chance to explain in the previous examples. For this variation, you will need to use 2 fingers to press down 3 strings. Here is what you need to do: 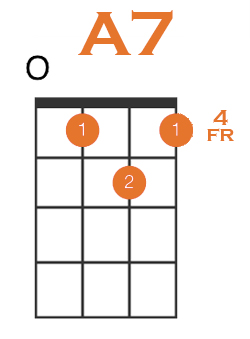 The interesting thing about using your Index finger for this variation is that you will be able to barre press on the 4th fret while playing the C string on the 5th fret. Anyway, no matter that you’ve pressed it on the fourth, the note will start playing from the 5th fret because from that fret on it plays freely. Also, for this chord, you will need to leave the G string to play open. Try it out and you will see how easy it is.

The second inversion that we are going to explain starts from the 6th fret. And for this one, we also have two strings that will ring open, without any pressure on them. You will need to use the G and the C string. Let’s see how:

Pretty simple press for this chord as well. Maybe it’s not simpler than the root one but can come in handy when transferring to an A7 chord down the fretboard. With a little practice, you will be there.

The last variant that we are going to explain in this guide will be starting the chord from the 7th fret. You will need to use 3 fingers for 3 strings, and you are leaving one sting open to ring. Here is the step-by-step process of placing your fingers: 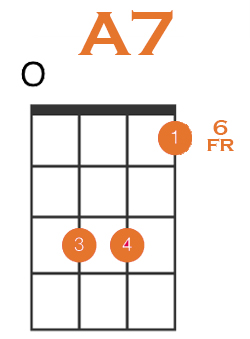 Another simple one. If you find to have a hard time pressing it, you will need to practice a bit more or choose another variation for the song you want to perform. But we prefer it if you spend some time and learn it.

How to Play A7 Chord on Piano

Famous Songs that use the A7 Ukulele Chord

The Beatles’ rendition of “Twist and Shout” was launched on their first UK album Please Please Me, based mostly on the Isley Brothers’ version. John Lennon offered the lead vocals and initially felt ashamed of his efficiency within the track “because I may sing better than that, however now it does not trouble me. You’ll be able to hear that I am only a frantic man doing his best.” A second take was attempted, however, Lennon had nothing left, and it was abandoned.

Within the UK, “Twist and Shout” was released by Parlophone on an EP with “Do You Want to Know a Secret”, “A Taste of Honey”, and “There’s a Place” from the Please Please Me (1963) album. Each EP and album reached No. 1. In Canada, it grew to become the title track to the second album of Beatles material to be issued by Capitol Records of Canada on February 3, 1964.

Conclusion – How to Play A7 on Ukulele

Wow, we thought that this would be a hard task, but actually, it came out to be just easy as the others. We are happy that we are progressing into teaching all of you new and more difficult chords and ones that are not used that frequently.

Anyway, building up your knowledge on various chords will shape you into a professional ukulele player and you will have no issues when you will face new songs.

Please let us know if you want us to improve something or you need more information on the chords we are showing. Happy learning and stay cool!

Below you will be able to find a video on how to strum A7 Chord on the Ukulele!

If in case you have any questions on the A7 please let us know in the comments.

The Best 6 Ukuleles by Mitchell In 2022 + Mitchell Ukulele Review!

How to Play C Minor on Ukulele + 3 Easy Variations!

Colorful Ukuleles: Check Out These 8 Models – Best for 2022!

Useful Wall Ukulele Mount That You Need to Have in 2021